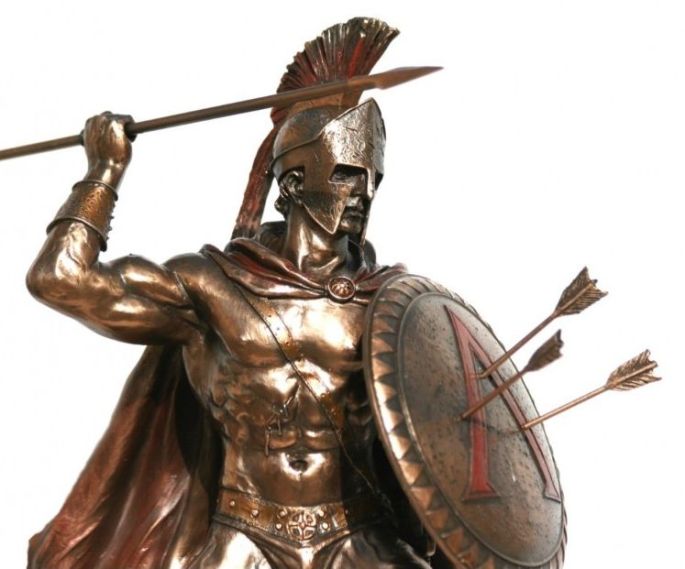 Yang Metal is a warrior, who has all the physical and mental strength to stand up for those in need. He is the champion of truth, the mythical hero who will stand up for all those causes in which he can see a noble goal.

Morality, honor, respect are all keywords for him. Yang metal is one of the most incorruptible element.

One of the most important thing what a Yang Metal needs to do in his life is to find a goal. A clear, concrete plan and strategy which he believes in and will follow with all his strength. Without this goal Yang Metal will be lost in life and will become like a released sword which will attack everyone and everything around him, often including even himself .

Yang Metal doesn’t really find his place in a calm, peaceful life. Without war he has all that free time which he doesn’t know what to do with. What warrior worth if there is no war?

Yang Metal is a survival, he can survive everything, except one thing, if he loses faith in himself and the goal what he was fighting for.

Yang Metal has a very strong, confident character who provokes strong emotions from people and these emotions in general are or very positive or very negative, there is no in between. He is not afraid to tell the truth directly, to anyone who comes in his way.

Yang Metal always wants to show that he is strong, he doesn’t need anyone, he can handle with every difficulties in his life on his own. He needs to learn how to express his feeling. He considers (wrongly) that his feelings, emotions are weaknesses and he needs to hide them.

He always ready to engage with a good cause. Yang Metal can live his life just according to his principles, not able to make compromises.

He has a strong competitive spirit and desire to prove.

Yang metal is born like an iron which hasn’t been forged yet. In his early life he can be very insensitive, without compassion. In Yang Metal’s life, often, there are big challenges, very difficult situations. He needs to go through lot of difficulties and hard time in his life, but these difficulties are forging and refining his spirit. In fact he requires these difficulties, needs the fight so he can prove to others and to himself that he is strong and brave who can handle everything.

Yang Metal is simple, straightforward, likes practicality. From outside he is a strong, grim commander but those who are close to him know that he has a very big heart. In fact he is the greatest soul from all the elements. For those who he loves and trust he would give everything what he has but for someone to see these, must get really close to him. Yang Metal is distant he let just very few people close to himself, but if someone once got close to him, Yang Metal will be his friend and ally for a life.

From all the ten elements, friends and friendship are the most important for a Yang Metal.

As in every part in Yang Metal’s life, faithfulness, honor, honesty will be very important in his relationships as well. It is very common, mainly in case of Yang Metal man to choose his partner for  life. He considers his partner as an ally with who they can fight together against the difficulties of life. If he commits himself beside someone he will last with this person till the end, unless his partner betrays him. If his partner looses his trust, Yang Metal will needs a long time to be able to forgive.

Yang Metal doesn’t like if someone expropriates him, his friends will be very important to him even in a serious relationship and he will not give up his friends for his partner even if he loves her a lot. Yang Metal should try to show his feelings and emotions towards his partner because he tends to lock up emotionally within a relationship as well.

He can get along the best with those people who had Yin Wood and Rabbit in their chart.

As in other parts of his life, Yang Metal is strong and confident in work as well. He is the typical leader, was born to lead. Yang Metal is not suitable to be an ordinary employee in a place where he cannot have word. He strives for leadership with his strength and perseverance and doesn’t like if others interfere into his work and life.

Yang Metal has a competitive spirit at work as well, often sees his colleagues as competitors. Wants to be always the best and very perfectionist, doesn’t like to seek help from others.

It is very hard for him to admit if he was wrong and accept his mistakes. He tends to force things even if it’s already clear to everyone else that he shouldn’t. Needs to pay attention at work to not force things which are not working well, a good leader always knows where to stop and accepts others’ opinion as well. His dexterity is not very developed, doesn’t like tasks which require little, detailed manual manoeuvres, he prefers speed and effectiveness.

Has a strong personality, honor is very important to him. Yang metal child is the one who stands up for his peers the most often.

Likes to be the leader of the group in what he is in and in general he is one of the most determinative member of his group. Yang Metal boys are often fighting at the school or nursery, their parents should pay attention to strengthen his confidence in that way so he can understand that courage is not equal to recklessness.